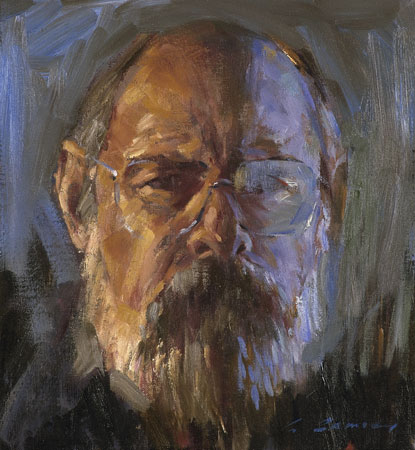 
I simply try to do interesting paintings. Not many have picked up a brush with an intention to do otherwise, yet a positive outcome is never assured. Failures become the ground for the next assault. Many years ago an instructor of mine stated, for the first time to my ear, that sentimentality is the enemy of art. I have always considered this statement in relation to the obfuscation of truth. I find it a useful thought to hold as I search around the city for subjects, or prepare to merely recycle a used canvas.


Carl Ramsey was an illustrator for many years. He has always considered himself fortunate to have spent his youth in the then still semi-rural environs of southern San Diego County. At nearby Southwestern College (1964-66) he came under the guidance of an excellent art department faculty, including the conceptual artist John Baldessari, who suggested Chouinard Art Institute as a developmental next step.


Four years later Ramsey began a career in illustration. Advertising agencies, Motor Trend Magazine, album cover designers, and eventually motion picture studios supplied the assignments and tight deadlines for the next two and a half decades.


One-sheet illustrations, including the final art for Quest for Fire, One Crazy Summer, Risky Business, Police Academy 4, Return of the Living Dead and Beetlejuice, among many others, along with innumerable drawings, sketches and other paintings were produced for film releases during the 1980s and early 1990s. Included within this time span is the creation of the original poster art for the long-running Broadway musical Dreamgirls.


Since then, oil paintings of a wide range of subjects, including landscapes and portraits, have been produced. Ramsey's most recent work consists mainly of the interpretation of the human and architectural elements in and around the Historic Core District of downtown Los Angeles, where the painter lived for several years.